It’s that time of the year! Fantasy football drafts are fast approaching and everybody’s putting together their personal lists. So I wanted to give you some players at each position that I’ll be targeting based on their current average draft positions (ADPs).

Timestamps are in the video description for quarterbacks, running backs, wide receivers, tight-ends and defenses!

We’re back once again with my fantasy diamonds piece, where I try to give you some names I think are undervalued based on current ADPs (average draft positions) across the three major platforms – NFL.com, ESPN & Yahoo.

I realized this wasn’t posted here until now, so R.I.P. J.K. Dobbins … 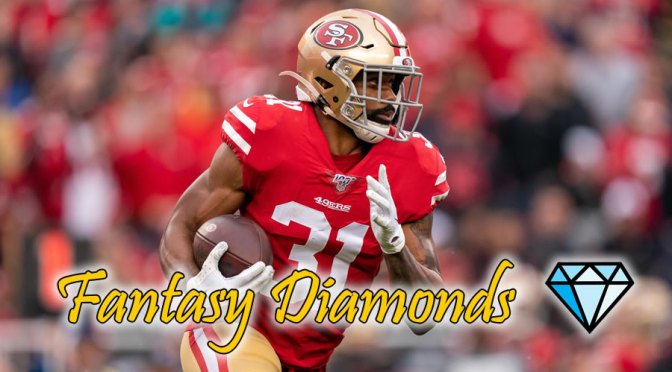 Now that we are close to a lot of people’s fantasy drafts, I wanted to hand out some names that I frequently end up with when I do mocks, just because I have them higher in my rankings. So these are players, who present value based on their ADP (average draft position), all as an average between the three biggest platforms for fantasy football – NFL.com, ESPN and Yahoo. That’s as of August 20th, with the first two having a full-PPR scoring system and the last one being set to .5PPR. They also all have a standard lineup of 1 QB, 2 RBs, 2 WRs, 1 FLEX, 1 TE, 1 DEF and 1 K. I had to wait until now, so that the draft data is representative of what people actually think of these players, especially with so many mocks having the majority of users set as auto-picks and distort the results.

So I will talk about what I like about these players heading into 2020, maybe a couple of concerns and talk a little bit about what I look at them as, compared to the where people are selecting them in their mock drafts. I listed three guys for every position that fills one spot in your standard lineup (QB, TE, DEF) and five for running back and wide receiver respectively. Oh, and I’m not doing kickers here – just pick one from the high-scoring team and that you know has a proven track record of converting on his opportunities.

Here are some of my favorite value picks: