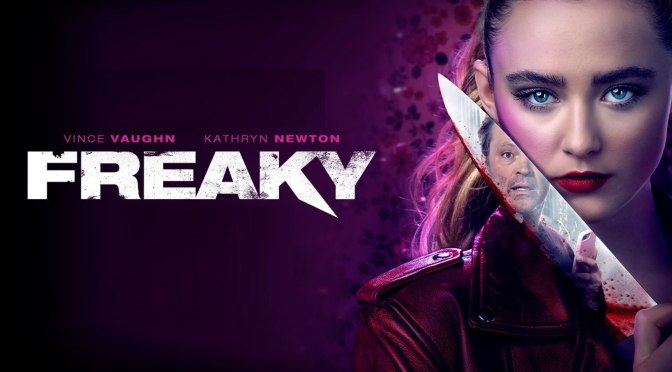 What’s going on readers!! If you are reading this I hope you are well and staying safe. The corona virus outbreak shut down screenings at the beginning of the year so it had been several months since I attended one. I was surprised when I received an email that said AMC theaters was hosting an early viewing of Freaky for Stubs members.

I was planning on seeing the film (release date is November 13th…ooohh, festive) but it was fun being able to attend a screening last night. The studio rep gave everyone in attendance a Freaky-themed facemask! That made me chuckle.

Blumhouse Productions’ latest feature puts a horror spin on the Freaky Friday story and I enjoyed the film. Millie, played by Kathryn Newton, is a normal high schooler who deals with high school problems such as popular mean girls, the obnoxious jocks, and the terrible teacher who talks down to students. Millie also has another problem. The town she lives in is home to an infamous serial killer named Garris (Vince Vaughn), aka the Blissfield Butcher, and Garris targets Millie after a school pep rally. Instead of becoming his next victim Millie and Garris swap out bodies and she has one day to switch back or else! It was hilarious to see Newton have a cold killer personality as she walked her school halls plotting on other students and no one knew about the swap. Watching Vince Vaughn get his “Jason Voorhees” on and also seeing him maneuver as a young woman was fun. I hadn’t seen Alan Ruck in any films in a while. He plays that terrible teacher I mentioned earlier.
I’m glad that this film is rated R. The first trailer I saw had me thinking this was going to be PG13 but thankfully that wasn’t the case. The gore in this film was awesome. There were some death scenes that made the audience say “ooooooohhhhhhh” together. Good practical effects with the splatter! I just wish the trailer to the film didn’t show as much. The trailer shows three death scenes so I knew they were coming when the scenes started happening in the movie. Not a major gripe but still….ARGH!! Avoid that extended trailer. Freaky may not blow you away but it’s a fun slasher film and the writers even have a couple of heartfelt moments woven into the story. It was a nice touch. If theaters are open in your area I recommend checking it out. I’ll be seeing it again! 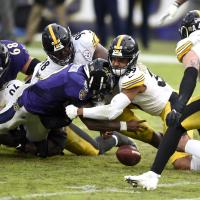 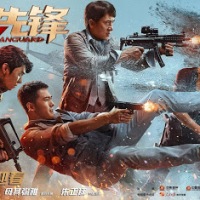