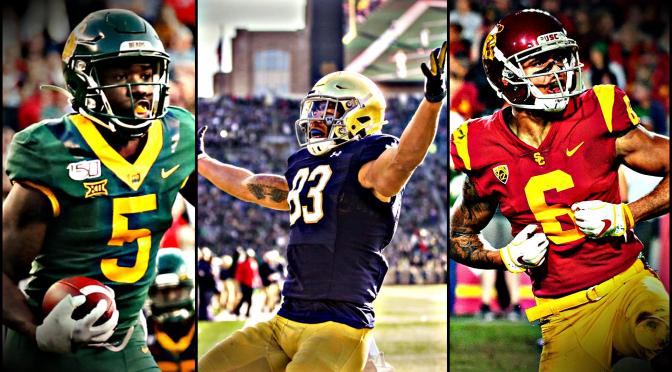 Despite the uncertainty as to when the NFL and the world for that matter will return to some semblance of normalcy dynasty football serves as a welcomed distraction for fantasy football enthusiasts. The 2020 NFL Draft has come and gone, signaling the start of Dynasty start-up and rookie draft season. Naturally there is a corresponding “draft fallout” and substantial changes to the Dynasty Stock Market. All of which preciptating this “Dynasty Stock Market Watch” 2020 NFL Draft Fallout Wide Receiver edition PART 2.

Burrow and Higgins fit to a TEE!

What does it mean for A.J. Green, Tyler Boyd and John Ross?

Despite an injury shortened 2018 and missing the entirety of 2019 the Cincinnati Bengals opted to franchise tag A.J. Green. While it would not have come as a surprise had Cincy opted to move on from Green; the franchise tag under the circumstances suggests that the Bengals still have designs on Green being a focal point of the offense. Reportedly, Green has been in contact with Joe Burrow and is planning on gathering the Bengals’ receivers to meet the 2020 1st overall pick to workout this offseason. A healthy A.J. Green figures to play the “Robert Woods” role in Zac Taylor’s offense; an offense that was Top 10 in plays (ran) despite averaging just 4.93 yards per play (28th in NFL). Woods finished as the WR14 in PPR leagues last season just outside WR1 status.

Freshly minted with a new 4-year deal, Tyler Boyd has flourished in A.J. Green’s absence. Boyd has posted back-to-back 1000 yard seasons (2018, 2019) and set a single season career mark in receptions and yards last year. Boyd’s solid if not spectacular all-around game was good for WR18 in PPR leagues last season despite inconsistent quarterback play. Just 25-years-old, Boyd should continue to thrive in Zac Taylor’s offense despite the addition of Tee Higgins and a healthy A.J. Green. Expect Boyd to continue his “Cooper Kupp” (WR4 overall) role as Cincy spreads the ball around in its 3-receiver sets. In fact, the Bengals led the NFL in 11 personnel snaps (75.3%) last season.

Injuries and a rookie season lost to coaching incompetence has marred the career of John Ross thus far. While his 35 receptions in 24 career games is underwhelming, Ross’ 10 touchdowns are outstanding; better than draft mate Corey Davis (6) and only two fewer than Mike Williams. The pair having played a combined 83 games over the last three seasons. The current coaching staff has an actual role for Ross and has demonstrated their confidence in him. Whether he is merely an insurance policy for A.J. Green or the designated field-stretcher in 2020, Ross’ “Will Fuller-like” upside is worth adding to your dynasty roster.

A.J. Green has intimated that he will sit out of whatever offseason program acutally takes place without a new, long-term deal. This doesn’t bode well for his dynasty prospects considering he’s been out for more than a year and has yet to play a snap in Zac Taylor’s offense. Furthermore, there’s no guarantee that A.J. Green will get an opportunity to play alongside 1st overall pick Joe Burrow. With Tee Higgins in the fold and Green’s recent injury history the Bengals may go in a different direction entirely. The juice may not be worth the squeeze for the decorated wide receiver.

Tyler’ Boyd’s career high 148 targets in 2019 were 40 more than his previous career high in 2018. Of course, A.J. Green missed 23 out of 32 games over that span. With the addition of Tee Higgins the Bengals’ WR room is crowded and Boyd’s monopoly on targets is in jeopardy. Volume is KING in fantasy and while Boyd’s dynasty floor (WR3) is fairly secure it’s unlikely that he will return WR2 value if the Bengals have their full complement of receiving threats.

A declined 5th-year option doesn’t always foreshadow a player’s demise but it certainly isn’t a ringing endorsement either. The simple fact of the matter is that John Ross has been plagued by injuries and inconsistency. Whether it be a multitide of physical ailments or dropped passes, Ross has not remotely approached living up to being a Top 10 draft selection. Even in A.J. Green’s absence Ross has seemingly lost ground in the target pecking order; bypassed by the likes of Auden Tate. Now enter Tee Higgins and potentially A.J. Green. Ross did get a vote of confidence from Zac Taylor last season but he has a steep uphill climb to carve out a consistent role among Cincinnati’s group of receivers.

Visit couchpotatogm.com for the FULL post including the Colts, Jaguars, Steelers, Rams and Jets.