I attended an early screening of Onward Tuesday night and I had a good time in the theater. I’m looking forward to seeing it again in premium format. The visuals were eye popping in regular format, so it’s going to be a optical feast in Dolby or IMAX. Onward is set in a land where technology has replaced magic, so mythical creatures now live in suburban settings. Some of the creatures still believe in magic, including Barley Lightfoot (Chris Pratt), who has a passion for the mystic arts. His younger brother Ian (Tom Holland) isn’t much of a believer. When the brothers receive a gift from their deceased father they go on a quest to retrieve a power source for the gift. The movie takes off from there. Pratt and Holland meshed well together as voice actors. Their voices are believable as teenagers. I enjoyed the way several family themes are written into the story. It makes for fun moments and also heart felt moments. This movie didn’t have me shedding tears but there are some “awwwwwwww” scenes I felt. Disney·Pixar always does a phenomenal job in the animation department, which was the biggest highlight of the film for me. There were several scenes that looked real. The attention to detail was palpable. Seeing ogres and pixies in everyday settings got a lot of laughs, but it definitely was more adults laughing than children. The youngins will understand later. Onward is a solid entry but in my opinion it doesn’t hit the level of Inside Out or Coco. It’s still fun for the family, and I recommend spending a few extra bucks and checking Onward out in a premium format. Your wallet might not be happy, but your eyes will be. I’ll be seeing this again in Dolby Cinema for sure! Check out my live review here: https://www.facebook.com/MoviesWithMigs/videos/622222575281437/ 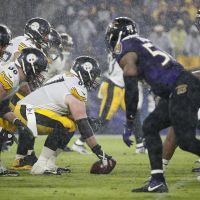