The holidays can be quite stressful and you don’t always get to put in as much work as you would like, so I couldn’t put out a fully detailed article this week the way I usually do. However, I wanted to take the time to at least give a little preview for the first round of the NFL playoffs.

Therefore I took a look at what I think are the biggest matchup advantages for each Wildcard game. This doesn’t automatically that the team who has the upper hand in that particular matchup will win the whole game, but it could easily end up being the decisive factor, depending on how things turn on. Here they are:

As far as coaching mismatches go, I think McDermott is pretty much heads and shoulder above O’Brien. While the Bills have struggled stopping the run right up the middle to some degree, in coverage they will be all over some of the simplified pass concepts by Houston. With McDermott’s situational awareness and the predictable run-pass splits by O’Brien, depending on the flow of the game, this will also allow Buffalo to commit more bodies to stop the run game. If the Texans win this game, it will be more about Deshaun Watson creating plays off script than the X’s and O’s battle between the two coaches in my opinion.

Everybody has been talking about the lack of weaponry at the skill-positions for New England and while this has absolutely been a problem for them, their offensive line has also struggled giving Tom Brady time on longer-developing pass plays and deeper dropbacks. Their duo of offensive tackles has been sub-par and will face a tough test against one of the up-and-coming edge rushers in the league. Second-year man Isaiah Wynn has not looked a former first-rounder after missing his first one-and-a-seasons and veteran Marcus Cannon has allowed a career-high 5.5 sacks in 2019. Harold Landry could give both those guys fits with his speed and bend around the corner.

“Can’t Guard Mike” has already set a new all-time mark for receptions in a season, but if Mike Zimmer and his defense don’t go away from their basic scheme and bracket #13, he could be in line for another huge day. Minnesota mostly runs a single-high safety defense with cover-one and cover-three principles, while using little wrinkles to adjust to their opponents. However, they leave their corners on islands to some degree and I don’t see anybody who can slow down the Brees-to-Thomas connection because of the precision they operate with. That is especially the case if Mike gets to line up against Xavier Rhodes, who has been a shell of his former Pro Bowl self. 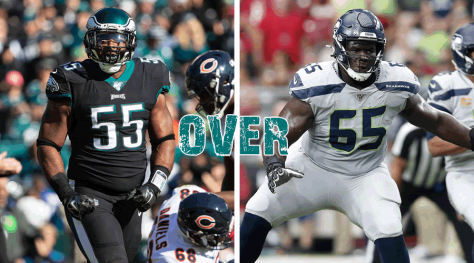 The Seahawks are coming off a heartbreaking loss in front of the 12s to lose the division, while the Eagles won their last four games and now get to host a Wildcard game – so motivation and momentum could be a big factor here. I also think Doug Pederson’s aggressive nature is an advantage over Pete Carroll’s conservativeness in certain situations. When I look on the field however, the one glaring is mismatch to me is long-time underrated star going up against one of the worst starters in the league. Brandon Graham is full go on every single snap and will his combination of power and leverage to make life hard for Ifedi, who is an okay run-blockers but has really struggled in the true dropback pass game, which will be a part of the game if Philly manages to keep the run-heavy Seahawks behind the chains.

For more coverage around the NFL and college football go to halilsrealfootballtalk.com