There Is A Nasty Contract Feud Brewing In L.A. Between The Chargers And The Dynamic Melvin Gordon.

Of course, I’m always going to side with the player when it comes to contract disputes. The career span of the average NFL player is approximately 3.3 years. However, as I sit to evaluate this upcoming saga with a fine tooth comb, I stumbled upon some interesting facts.
Melvin Gordon has only eclipsed a 1,000 yards once in his 4 year career. He’s never garnered 60 or more receptions in a single season. We all know 1,000 yard rushers combined with receptions out the backfield, are the marks of an (elite) complete running back. 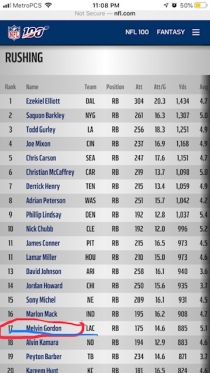 Gordon was one of three running backs in the NFL’s top 25 to average more than 5.0 a carry.

Melvin has totaled at least 12 touchdowns in the past 3 seasons. Also, he’s only lost 2 fumbles during that span. 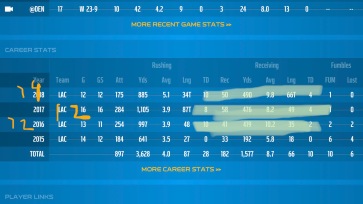 Like I said before, my allegiance lies with the player. Although, his numbers weren’t what I expected. Gordon is a game changer, he can take it the distance on any given carry. Despite what his numbers revealed to you, Gordon is an excellent pass catcher out of the backfield, and one hell of rusher! I just don’t know if the Chargers agree with me.

Decision: Chargers Don’t Cave, Melvin Holds Out! Don’t Draft Him! Let Him Be Someone Else’s Problem!